But the 23-year-old psychology graduate student has dealt with the abstract in ways that parallel this Russian abstract painter and art theorist.

The most obvious parallel is that Glover is a painter too. And like Kandinski, she realizes the intrinsic value of art in dealing with matters of human nature; of reflecting not only what is aesthetically pleasing, but also what is internally revealing.

“The older I get, the more I study, the more confident I become,” said Glover. “And I find that in my art. More and more I’m starting to do original work, most of it abstract. I’m starting to trust in my abilities more.”

Though Glover’s path did not lead to pioneering a new school of art, it began with similar intentions. Beginning as a psychology major and art studio minor, Glover found her original goal to become an art therapist morphing within a year of her undergraduate career to a psychology and philosophy double major.

“I wanted to do graphic design, but I didn’t want to just sit around. I wanted to be proactively interacting and helping people. So I dropped art studio and kept the therapy aspiration,” said Glover.

Glover cites her Honors class with Kevin Harrelson, a former postdoctoral teaching scholar with the UK Honors Program, as a major influence in her decision to take up the philosophy major.

The small class size, individual attention and combination of graduate and undergraduate students in the same classroom made Glover’s studies in the philosophy department not only productive, but especially memorable.

After committing to psychology and philosophy for three years and obtaining bachelor’s degrees in both, Glover sees ways in which her studies meet and diverge.

This ability to find analogies between what may seem like two opposing disciplines might explain why Glover has found the writings of German philosopher, Immanuel Kant, to have had the most significant effect on her.

“He takes apparent contradictions and marries them…I’m a big fan of synthesis in general,” said Glover. 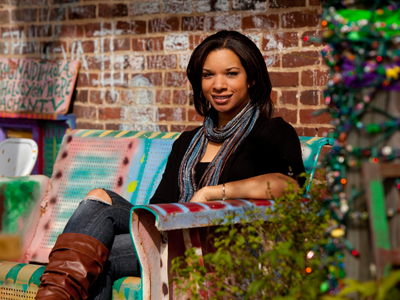 And as the road extends and Glover continues her work in psychology, whether that ends in owning her own private practice or teaching at a university, she sees the reach of philosophy extending in kind.

“In the future, it is likely to help by me being used to communicating rational arguments,” Glover began. “So, for example, if I have a client who has irrational thoughts or behaviors, I will be able to better explain to them that irrationality and what they can do to change it,” she explained. “Much of therapy is all about correcting irrational thoughts and using reason to feel, act, and think in more adaptive, healthy ways.”

But for the time being, Glover applies what she learned while pursuing an undergraduate degree in philosophy to her experiences as a graduate student.

“Studying philosophy has taught me to think more critically. Currently, it makes me a more thoughtful participant in class discussions, as well as a more logical, coherent writer,” said Glover.

Aside from coursework – two seminars about Dialectical Behavior Therapy and personality – Glover divvies up her time among developing a thesis related to her personality research based on the 5-factor model, while working at The Harris Psychological Services Center and the Brain Injury Unit at Cardinal Hill.

The 5-factor model is based upon – you guessed it – five factors:  openness, conscientiousness, extroversion, agreeableness and narcissism (OCEAN). Glover’s thesis is aimed at developing a measure of these factors.

At the Harris Psychological Services Center, UK’s departmental training clinic on Maxwelton Avenue, Glover works as a therapist with other graduate students.

“Here, people throughout the community with problems like depression, anxiety, marital problems – come to get therapy,” said Glover. “The therapists are all graduate students, myself included, and we are able to see these clients because all cases are supervised by licensed clinicians.”

And at Cardinal Hill, Glover rounds out her schedule by administering and scoring assessments that test visual/spatial capacity, motor skills, executive functioning and memory to clients that have suffered traumatic brain injuries.

“The scores help us determine the clients' deficits,” said Glover. “Then, my colleague writes a report, which is read by a physician, and the client gets the treatment they need.”

Kandinski said that, “in every painting a whole is mysteriously enclosed, a whole life of tortures, doubts, of hours of enthusiasm and inspiration.” The same could be applied to Glover’s studies and now burgeoning career, as both look within the mind and try to make sense of ideas that seem hopelessly abstract to others.

“Psychology made me a lot more optimistic about the ability to control my emotions and thoughts. It was and continues to be empowering,” said Glover. “Philosophy has shown me that nothing is as simple as it may seem. I haven’t come out with any more answers, just more questions.”