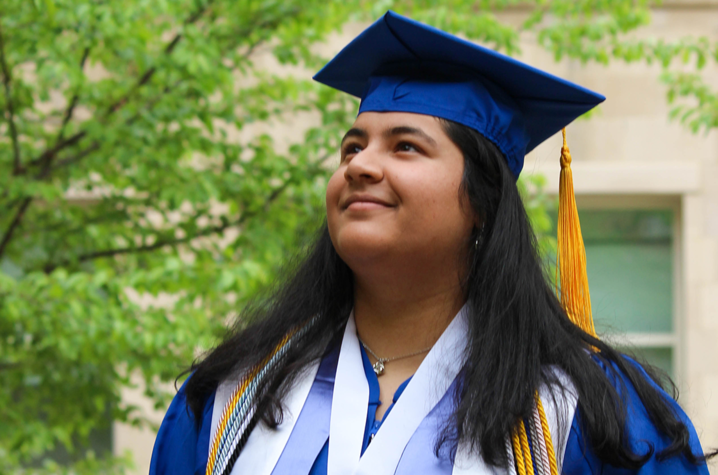 LEXINGTON, Ky. (April 27, 2022) — On this Wildcat Wednesday, the University of Kentucky is celebrating Supriya Challa, who will graduate next week with a degree in psychology from the UK College of Arts and Sciences and Lewis Honors College.

Challa, who is from Okemos, Michigan didn’t follow a typical path to the commencement stage. She had experienced a traumatic childhood and was looking forward to leaving Michigan to make a fresh start at UK. But during her first semester in college, Challa discovered that the source of her childhood trauma had not released its grip on her life. The challenges she was dealing with in her personal life, behind the scenes, began to affect her academic performance.

These challenges took a toll on her mental health in that first semester. Challa struggled in silence with untreated depression and anxiety, too afraid to talk to anyone about what she was going through, or the awful things that had been happening in her personal life. She stopped going to class, but convinced herself that she could turn things around on her own during finals week. But over the 2016 winter break, she received notice that she was academically suspended from college just after her first semester.

After seeing Challa lose so much of her confidence within herself, her mother knew she needed a radical refresh. In March 2017, with her mother's support, Challa embarked on a month-long trip across the desert in El Paso Texas, along with five other young people and two guides. The group trekked more than 100 miles, lived on campsites, journaled and even participated in a three-day solitary trip. During this month, Challa rediscovered herself and her confidence.

She returned with a plan. In fall 2017, she enrolled at Bluegrass Community & Technical College and was appointed a therapist and psychiatrist to talk through the struggles from her childhood and previous year. In her two years at BCTC, Challa excelled academically, graduating with two associate degrees and a 3.9 GPA. Additionally, she became a senator in the student government and a Presidential Student Ambassador. She also volunteered at UK Chandler Hospital and tutored math.

In 2019, Challa applied to transfer back to UK and was accepted. Challa had a plan and would be unstoppable in seeing that plan through. She knew about the upper-level admission process for the Lewis Honors College and applied for it in her first semester back at UK. She was accepted into the Honors College in Spring 2020 and then the Honors Early Assurance Program with the UK College of Medicine. This past academic year, Challa completed the Honors EAP, was accepted into the College of Medicine and will graduate with a 3.9 GPA next week.

“When I was at BCTCS, I wanted to work hard to come back to UK, with the specific goal in mind of not only returning, but getting into the Honors College through the upper-level admission process," Challa said. "This was important to me because I knew it would help me get into medical school. When I got into Honors, I found out they offered the Early Assurance Program, and I immediately applied. Fast forward two years, I am graduating and attending medical school at UK in August. After completing medical school, I look forward to helping other children who feel powerless."

In addition to her academic success at UK, Challa was involved in a variety of organizations housed in the Office for Student Success. She was a member of Phi Beta Kappa and Omicron Delta Kappa honors organizations, served as a Student Wellness Ambassador, worked as a research assistant at CHaSE (Cognitive Health and Sleep Equity) lab for Lauren Whitehurst and tutors children at the Carnegie Center for Literacy and Learning.

Though Challa never let adversity get in the way of her dream of earning her UK degree and attending the UK College of Medicine, she does not think she would be here today if it weren’t for the support she received from faculty and staff across campus, her peers and most importantly, her family.

“I want to thank my mom and grandparents for their everlasting belief and support. I would 100% not be in this position today if it weren’t for them,” she said.

As someone who thought their dream was lost just a few years back, Challa hopes that others will learn from her story and see that through support and determination, the wildly possible is always possible. She encourages others to take advantage of the many opportunities available to them at UK and to always invest in themselves.

Look for more #UKGrad stories like Challa's this week and next on UKNow and UK's Facebook, Instagram and Twitter (@universityofky). The May 2022 UK Commencement Ceremonies will take place Friday, May 6, and Saturday, May 7, at Rupp Arena at Central Bank Center. More information is available at https://commencement.uky.edu/.

The University of Kentucky is increasingly the first choice for students, faculty and staff to pursue their passions and their professional goals. In the last two years, Forbes has named UK among the best employers for diversity, and INSIGHT into Diversity recognized us as a Diversity Champion four years running. UK is ranked among the top 30 campuses in the nation for LGBTQ* inclusion and safety. UK has been judged a “Great College to Work for" three years in a row, and UK is among only 22 universities in the country on Forbes' list of "America's Best Employers."  We are ranked among the top 10 percent of public institutions for research expenditures — a tangible symbol of our breadth and depth as a university focused on discovery that changes lives and communities. And our patients know and appreciate the fact that UK HealthCare has been named the state’s top hospital for five straight years. Accolades and honors are great. But they are more important for what they represent: the idea that creating a community of belonging and commitment to excellence is how we honor our mission to be not simply the University of Kentucky, but the University for Kentucky.